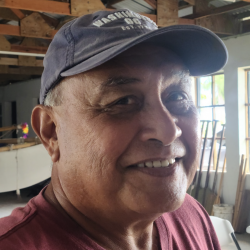 Born and raised in Saipan, Ike is a founding member of the Friends of the Mariana Trench and served as the FOMT Chairman from 2008 to 2020. In early 2021, the new board named him Chairman Emeritus. Before he retired, he was the secretary for Department of Environment Quality from 1979 to 2000. In his retirement, he founded Cabrera Enterprises Services in 2001, which is active to this day. Ike was previously a board member of Marianas Resource Conservation and Development Council from 2004-2012. He also served on the Pacific Basin Soil and Water Conservation District (SWCD) board from 2004-2007 and the Saipan/Northern Islands SWCD from 2001-2007. Today, when he is not working on his farm, he is still actively involved with SWDC, particularly with watershed projects.